Jane Morgan: In My Style

For the first time ever, over thirty performance gowns exclusively selected from the private collection of Jane Morgan will debut at the Brick Store Museum in an exhibition titled “Jane Morgan: In My Style.” The collection spans the singer’s illustrious stage, screen, and TV career from the 1950’s-1980’s. Jane Morgan has a Star on The Hollywood Walk Of Fame; twice sang the winning song at the Oscars; received numerous awards and accolades across her international singing career, and is well known for the special gowns she wore for every appearance, including singing and performing for Royalty, including Queen Elizabeth and Princess Diana; Heads of State such as French President, Charles de Gaulle; Presidents John F. Kennedy, Richard Nixon, Gerald Ford, Jimmy Carter, Ronald Reagan, George H.W. Bush, and George W. Bush. 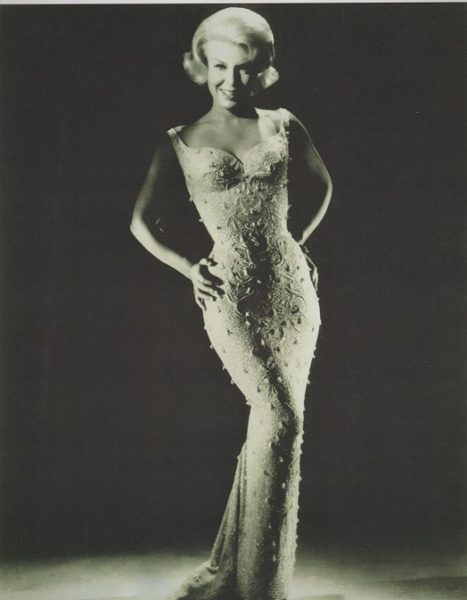 The time is right to bring the collection to the public. As Morgan says, “They’re just so magnificent. It’s hard to believe I even wore these treasures.” To prepare the designer gowns for the exhibition, each piece was unpacked, sorted, selected, and prepared in Kennebunkport and in New York City. Morgan calls them the “perfect confections,” each piece decorated with an abundance of dazzling, luxurious embellishments like sequins, beading, feathers, French lace, intricate embroidery and the finest fabrics. To curate the show, Morgan worked closely with Bonnie Bien, owner, LA PRESSE PR, who as a teenager, travelled with and personally assisted Morgan for four years. Morgan hand-picked Bien to help with the gown selection/preparation for the “In My Style” Exhibition, particularly because of Bien’s first-hand knowledge of the collection and the famed designers who created the unique, one-of-a-kind gowns including Kathryn Kuhn, Donald Brooks, Stephen Yearick, Ben Reig, Ruben Panis, Oleg Cassini, Monte Streitfield, and Marion Wagner.

“In My Style” focuses on Morgan’s desire to find a good purpose for the gowns which she wore on stage. The exhibit takes the pieces from the long-packed-away boxes straight to the public eye; first in Kennebunk and then travelling to other locations across the country. For Morgan, who realized from the start that the unique gowns needed to be housed in an equally unique and eclectic way, the idea for the Museum presentations was the only way to go. As she puts it, “no one was getting to see all these fabulous pieces. My goal was to find the best way to exhibit a sampling of the gowns; share them in a fabulous Museum setting.

As a further testament to Morgan’s legacy and enduring fame, solidifying her and her songs as classic and timeless, her well-known song, “If I Could Live My Life Again”, was chosen for the closing music of Season 2, Episode 10, of the Apple TV hit, “The Morning Show”, starring Jennifer Aniston and Reese Witherspoon.