The 17th Century: Colonies and Conflict

Prior to the naming of our modern-day towns in this region, which happened in the late 17th and early 18th centuries, the geographic area between the Ogunquit and Kennebunk Rivers (all the way to Cape Porpoise), was known as Nampscoscocke (spellings vary in old records). It was inhabited most likely by the Almouchiquois, a distinct indigenous tribe that brought agriculture to the area and existed in southern Maine and northern Massachusetts.

By 1524, European explorers were in the Gulf of Maine. However, the earliest known instance of exploration off the coast of the Kennebunks is the 1602 visit of the Englishman Bartholomew Gosnold. Other English explorers were enticed to come to the Southern coast of Maine by reports of Gosnold’s voyage that were printed in England. In 1603, a group of merchants set out from Bristol, England, under the command of Martin Pring. Pring’s pilot was the same who sailed with Gosnold. As part of their journey they explored four rivers, one of which was either Kennebunk or the Mousam River.

In 1604, Sieur de Monts and French Royal Geographer, Samuel Champlain, along with a crew of about 20 sailors explored the coast of Maine while looking for a favorable location for a French Colony. One of the spots on which they landed was current-day Cape Porpoise, then named by Champlain, “Le Port aux Isles.”

Champlain is also credited with observing the distinct differences in native tribes inhabiting the area at the time. He differentiated the groups as Souriquois (assumed to be describing the Micmac tribe); Etchemin (assumed to be Maliseet and Passamaquoddy) and Almouchiquois, the people living on the coast of New England south of the Kennebec River all the way to the Massachusetts Bay colony.

A 17th-century map shows New England as a coastal enclave extending from Cape Cod to New France, 1685. Library of Congress

Maritime industry in the Kennebunks began in the early seventeenth century at Cape Porpoise and on the Mousam River. These early settlers to the region were not seeking from freedom from religious persecution. The majority were entrepreneurial Englishmen who saw economic opportunity in seasonal fishing stations and the promise of vast stands of hardwood and pine mast trees. Tidal rivers with natural waterfalls provided water power to turn timber into profitable lumber. By the late 1620s, these men were on the coast of Southern Maine competing for land and establishing year-round settlements.

Historian Edward Bourne on the First Settlers in Maine

“While Puritanism presented many worthy elements of character, there was very little of it in Maine. Those who first located themselves here, were not refuges from any religious intolerance. They left England not for the enjoyment of religious liberty, but rather from those motives which impel men to any undertaking which may lead to monetary acquisition.”

Around the same time, intertribal wars caused serious losses for the Almouchiquois. Not only were they losing their land to new European settlers, but their population weakened due to war, famine and illness. By 1620, the once prosperous region was almost cleared of Almouchiquois members due to the attacks by both other tribes and Europeans. Visitors and explorers often noted in their letters and journals the absence of native peoples and the haunting remains of former villages.

After twenty years, English settlement of the Kennebunks had been firmly established by the 1640s in Cape Porpoise, Goose Rocks Beach and along Kennebunk’s beaches and waterways. The Kennebunk River was the dividing line between two counties; to the west of the river was Yorkshire with York as its center and the east of the river was named New Somersetshire with Saco as its center. Disputes over land grants and titles was common in the 17th century, with land boundaries often overlapping.
John Sanders was one of the earliest settlers to this area, he received a land grant in 1643. Sander’s house is believed to have been on the coast where he fished, hayed the salt marshes and provided ferriage over the Mousam River. Early settlers included George Buckland, John Cheater, William Symonds and Daniel Pierce. In 1649, accounts detail how the sachem (chief) of the local tribesold the whole territory of Nampscoscocke to John Wadleigh in 1649. Why Sachem Thomas Chabinocke sold the entirety of this land to European settlers, we do not yet know.

Sachem Thomas Chabinock sold land ‘‘called by the name Nampscoscocke, bounding between Noguncoth [Ogunquit] and Kennebunke [Rivers], and up as hy as Cape Porpus ’’ to John Wadleigh of Wells. Several members of Chabinock’s family witnessed this deed: his mother, Ramanascho, his sister Nell, and Nell’s husband, ‘‘Sassagowhaway.’’

As opposed to the relative peaceful co-existence at the turn of the century, European settlers and native peoples clashed, often violently, as the 17th Century wore on. It was a scary time for anyone living in the New England region, and in the Maine wilderness. A rising source of conflict between Europeans and Native Americans was over the concept of property. The English most likely assumed two things: 1) that the Wabanaki and other area tribes had no right to the land, or, 2) that they had been given exclusive rights to to the land through treaties with the native population. In contrast, the Wabanaki believed they had agreed to share the land with the English. Treaties failed to keep the peace because of this basic misunderstanding. They also failed due to insincerity on the part of the colonial governments who had no intention of keeping the treaties. 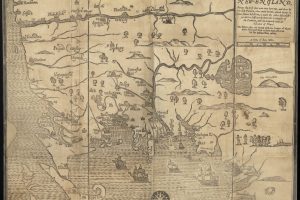 This map was the first to be printed in the British Colonies. It is based on a 1665 survey by Bostonian William Reed, it was repurposed to illustrate William Hubbard’s Narrative of the Troubles with the Indians in New England. The Narrative described King Philip’s War of 1675-76.

Another source of conflict was that Wabanaki use of the coast was increasingly blocked by European settlements. Dams were built on rivers to produce waterpower necessary to run sawmills and gristmills. In the fall and winter, native tribes depended on moose, bear, caribou, deer and beaver which lived in the forests that were now cleared for pasture – driving their food sources inland. An environment that native peoples had used for thousands of years was transformed in a short period of time. As more drastic changes took place, more violent conflicts flared. There were five “Indian” wars in New England (1675-1759) that left the native population decimated and displaced.

In 1653, the town of Wells was established as the third incorporated “town” in the District of Maine in the Massachusetts colony. The town’s secondary village of Kennebunk would slowly build over the next fifty years, and be named its own distinct village in 1717 (the town of Wells eventually split into two – Wells and Kennebunk – in 1820).

Settlers here worked very hard, from morning until night. They planted crops, fished, and built homes and mills. They depended on local successes to continue their livelihoods, whether it was supporting the settlement or shipping materials back to Europe.

Although these Indian Wars slowed development in Southern Maine, European settlers never left the Kennebunks entirely. Lumber and lumber products gave them a profitable resource. The first sawmill in Kennebunk was built in 1669 on the Mousam River at “Mousam Mills” in what is now the center of Kennebunk. It was built by Henry Sayward, who came over from England in 1637. Most early settlers started farms along the coast for ease of transportation. Sayward’s was the first settlement in the what is now the village of Kennebunk. He also built a grist mill and named both the “Mousam Mills.” Previously, the river had been called Cape Porpoise. It is unknown where he got the name Mousam but thereafter it was called the Mousam River. 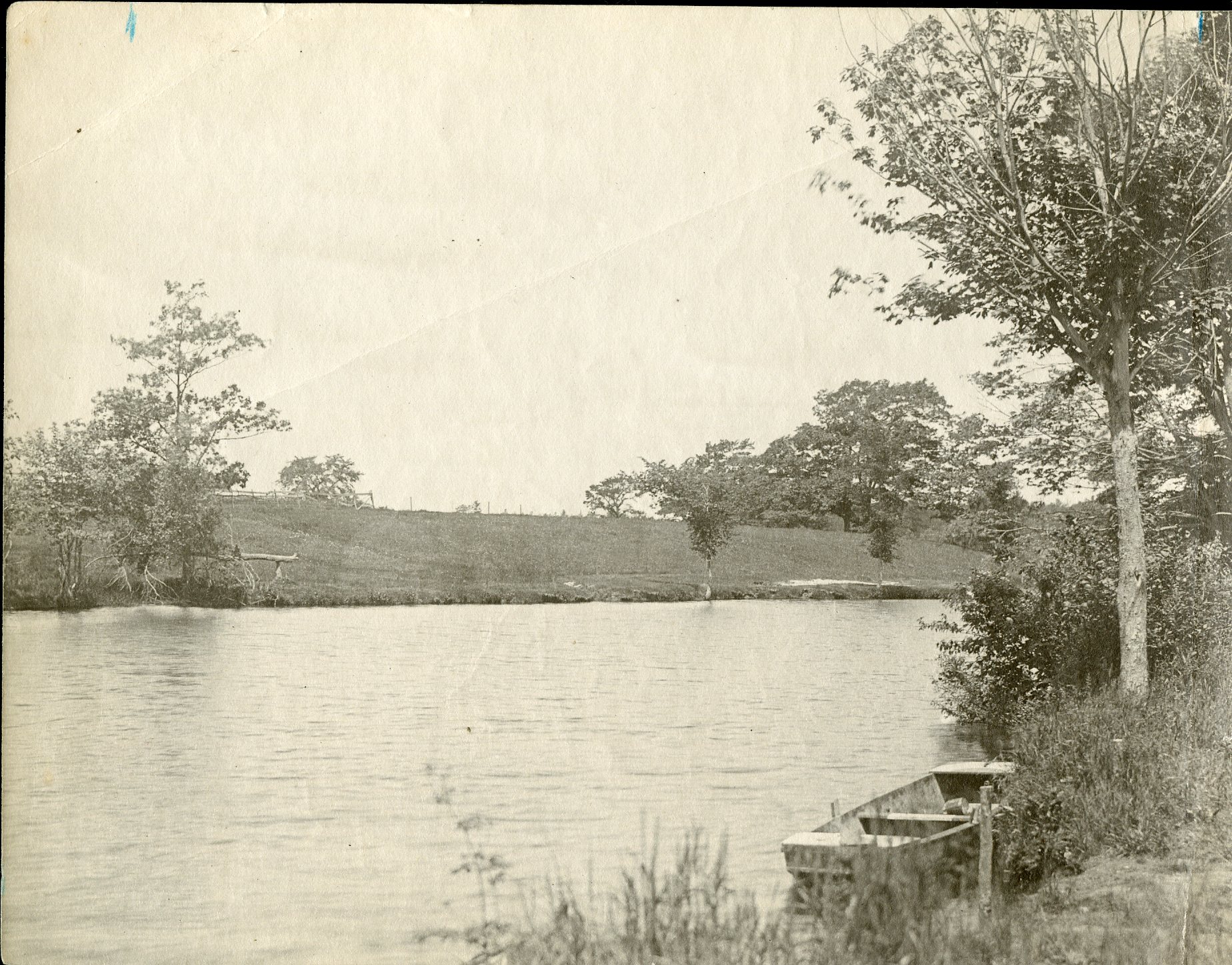 Photo of the site of the Sayward Mill on the Mousam River at Sayward Street, Kennebunk. Date unknown
Sawmills were established on the Kennebunk River by 1682 and from these mills lumber was rafted downstream where it was loaded onto incoming vessels that carried it to Boston and other seaboard towns. Trade in lumber and wood products sustained the Kennebunks for 200 years.

According to scholars and archaeologists in southern Maine, European and intertribal warfare in the 17th Century established the “no man’s land” for native peoples who lived here in the Kennebunk region.  There are few notes on the existence of tribal members in the late 17th Century, including the Dony family, who were sachems in the 1680s. Because populations had been so decimated, tribes intermarried and dispersed. The Dony family, for instance, intermarried with the Pennacook (a Massachusetts tribe) and the Androscoggin. At the time, Dony’s village in Kennebunk had shrunk to just a few households. In a map sketch drawn sometime during King William’s War (1688–97), it indicates that “Doney” had only eight men at Kennebunk.

It bears repeating that this does not mean native Maine peoples have disappeared. We have many tribal members living in our communities today; and we look forward to furthering the collection of this history and culture.

In next month’s feature, we’ll explore how the “ownership” of Maine played a central role in the wars fought by the French, English, and Native Americans in the 18th Century. This not only fueled the colonies’ quest for independence, but Maine’s hope of separation from Massachusetts.

From the Brick Store Museum’s Collection

This ornated hand carved chest made of oak represents the high level of craftsmanship found in Colonial New England shortly after the arrival of English Settlers. The original owners, Reverend Joseph Capen (1658-1725) and his wife Priscilla Appleton Capen (1657-1743), were from Topsfield, MA. It is attributed to an unidentified but prolific joinery shop in either Ipswich or Newbury, MA. Possibly commissioned to honor their wedding. This piece is quite rare, with only five others identified. The Capens house which was built in 1683, still stands in Topsfield and is owned and maintained by the Topsfield Historical Society. This chest can be traced back through twenty-five generations. The Perkins, descendants of the Capens, moved to Maine and brought the chest with them. It came to the descendants at the Eliphalet Perkins house on Union Street, Kennebunkport, in 1801. 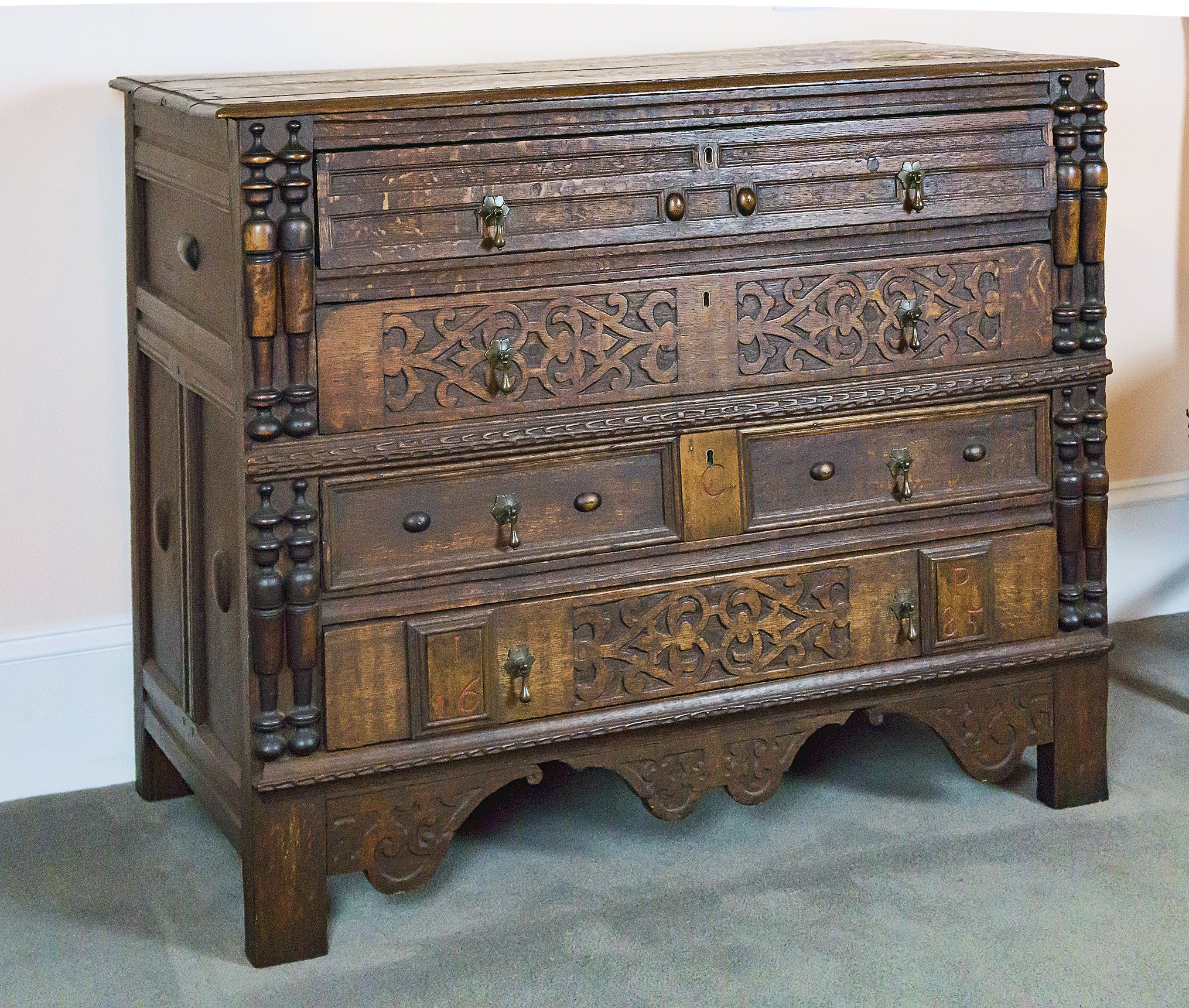 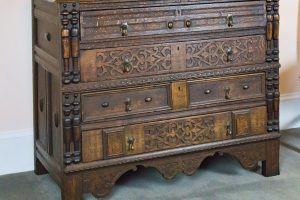 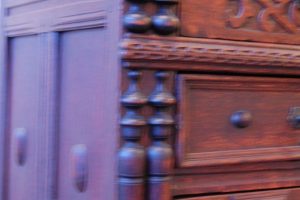 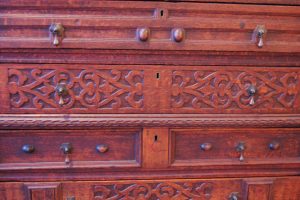 The earliest European settlers in America arrived with only the most basic provisions to re-create their material existence. Few settlers were able to take more than a chest or box with them across the Atlantic Ocean, so nearly all the furnishings for their new life were made by hand with local materials. Immigrant craftsmen continued to make objects that carried on the decorative tradition of their homeland.
Throughout the early colonial era, Americans made many of the objects necessary to their daily lives, such as hinges, locks, clothing, earthenware plates, bowls, and jugs, and forged farm tools. The majority of household tools, including cookware, was handcrafted from wrought iron by blacksmiths who formed each implement to endure through generations of usage by cooks. Other tools were heat was not a concern were often made of wood which was cheaper and didn’t need to absorb as much abuse as iron cookware. 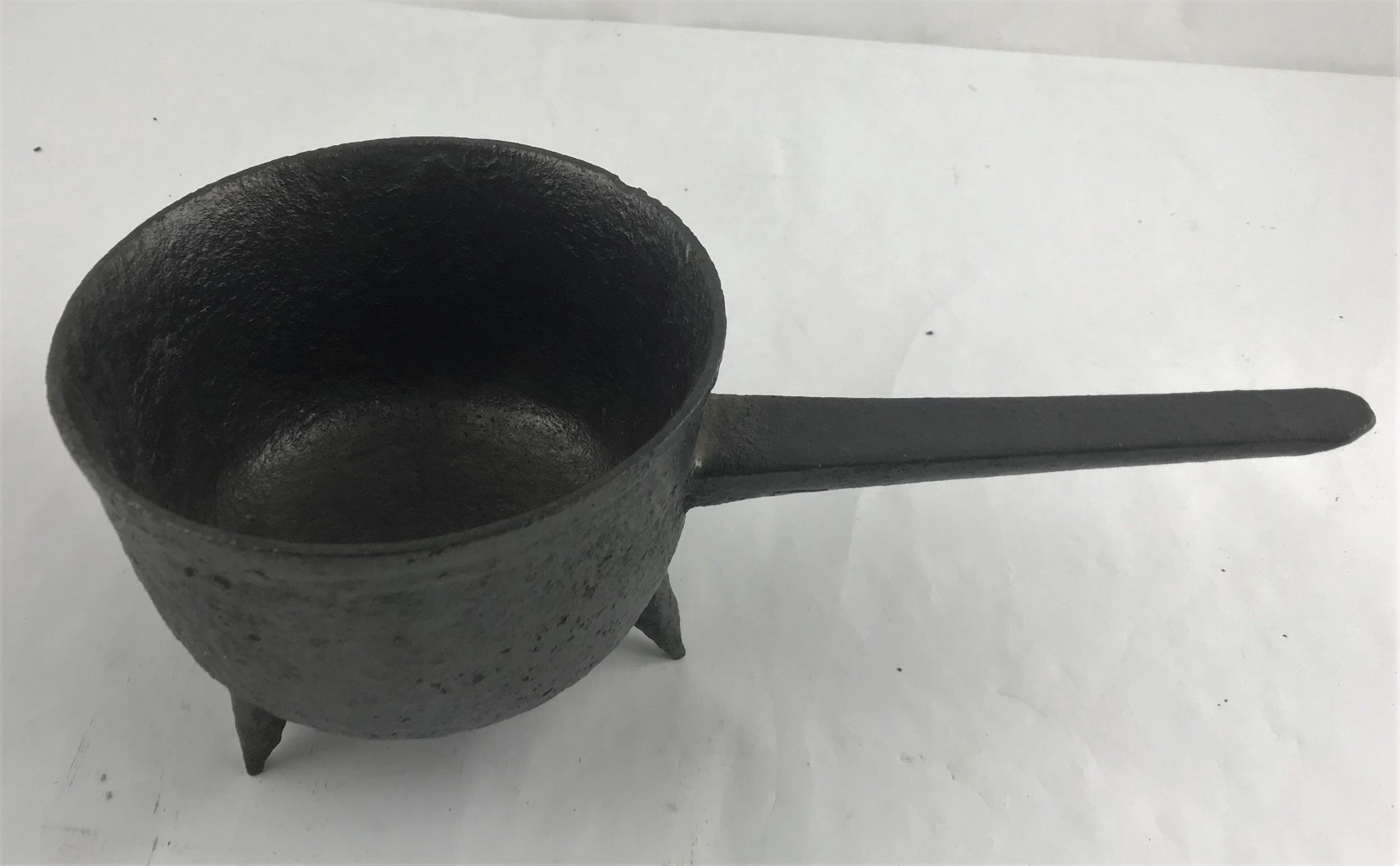 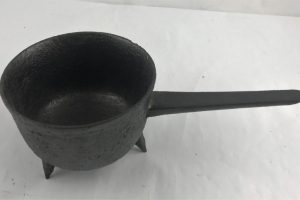 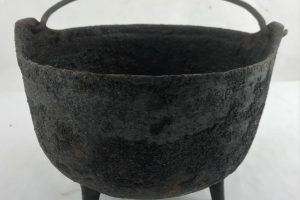