To Your Health: Examining the History of Modern Medicine 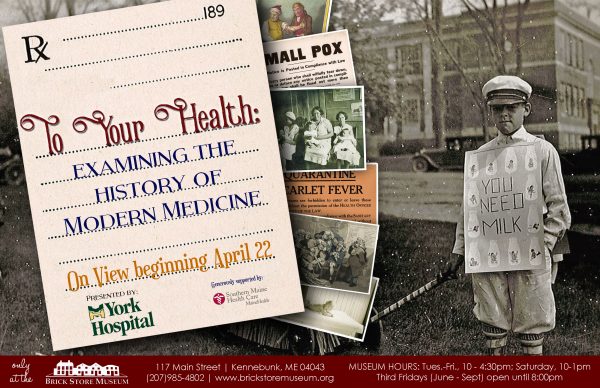 Throughout history, our bodies have experienced disease, medicine, and healthcare in different ways. The diseases that were once fearfully rampant no longer take our lives; but others have sprung up in their place, often with more complicated cures.

Throughout Maine and New England, it was not very long ago when many of these diseases were a common threat to our survival. Today, many of these life-threatening illnesses that shortened our lifespans have vaccines to prevent the disease altogether, while others still exist and solutions are still sought.

Click on the multi-colored tabs above to learn more about some of the diseases and their status today.

A common childhood disease. Highly contagious, in which a thick gray membrane forms in the child’s throat making it difficult for the child to breath. This symptom is accompanied by fever and severe weakness, finally affecting the child’s heart. The disease is caused by bacteria that cause toxins (poisons) to circulate through the blood stream and damage heart cells. An epidemic occurred in 1740s New England.

References to measles occur as early as the 7th Century. By the 10th Century, the disease is recorded as “more dreaded than smallpox,” which says a lot! Measles is an infection of the respiratory system, and is highly contagious. Most often, it is spread through direct contact with an infected person, and less frequently by airborne transmission. Symptoms come in two stages: First, the victim experiences a runny nose, cough, and fever. A week later, the victim’s fever will spike and a red blotchy rash will appear on the face and spread to the entire body. Small white spots appear on gums and inner cheeks. Complications from the disease include pneumonia, encephalitis, ear infections, and seizures. The 18th Century saw several outbreaks in New England.

Also called Pertussis, this bacterial disease is spread by coughing, sneezing and spitting. The disease was first described in the 16th Century and isolated in 1906. The symptoms are no different from the common cold, including tiredness and a sore throat. Soon after, a choking cough appears, which then causes vomiting and the feeling of suffocation. Between these attacks, however, the victim feels perfectly well. The “whooping” sound is heard as the victim intakes air during coughing; sometimes resulting in the victim’s stopping breathing altogether, resulting in faint. The disease lasts three weeks to three months. Deaths from the disease are primarily limited to babies due to respiratory failure. Complications include blood spots on the skin and in the eye, and tearing of the ligament at the base of the tongue caused by severe coughing.

According to the Centers for Disease Control, whooping cough was one of the most common childhood diseases in the 20th Century and a major cause of childhood mortality in the United States. Before the vaccine was introduced in the 1940s, more than 200,000 cases were reported annually; today, this number has decreased by 80%.

As Kennebunkers experienced outbreaks, infection, and probably death – like the rest of the country – families spearheaded the care of their own children, siblings, parents, and neighbors with the help of local doctors. As the diseases and treatments of the 19th Century advanced, doctors came to Kennebunk to begin a lifetime of healing patients at home. By 1809, there existed twenty towns in York County, with the population of the town of Wells (of which Kennebunk was a district before 1820) including 2,181 males, 2,301 females, and 7 African Americans, noted separately.

In the early 1800s, most doctors traveled by foot or on horseback to their patients’ homes. Dr. Jacob Fisher of Summer Street and Dr. Samuel Emerson of Pleasant Street were no different. In addition to visiting patients, Dr. Fisher also sold medicines from his home. Every doctor was limited to whatever tools and drugs he could carry in a hand-held case or saddlebag.

The 19th Century was a time when two-thirds of Americans lived on farms or in rural landscapes. Indoor plumbing was rare, and homes were heated solely by wood burning stoves and fireplaces. Men’s and women’s work was physically challenging – often leading to accidents. Unlike today, serious diseases like cholera, yellow fever, typhoid fever, diphtheria, malaria and tuberculosis were common. Up until the late 19th Century, the majority of healthcare in the United States took place at home. Family members – primarily women – performed routine care of the sick. Doctors, when available, did not usually attend except in very serious cases; and then they would visit the patient’s home.

“Country doctors” had almost no vaccines, no laboratory tests, and not many effective medicines. Responsible for treating a wide variety of medical problems, from broken bones to wounds to chronic and acute illnesses, doctors were generalists that had to build a great depth of knowledge on healthcare. 19th Century doctors charged their patients per procedure, like today –  more for emergency evening visits, less for children’s treatments. Payment would come in many forms: money, produce, goods, or services in-kind.

FROM THE GARDEN: 19TH CENTURY REMEDIES

Old remedies, passed down through families and across the yard by neighbors, played a big part in medicine and healing prior to the 20th Century. Whether family or physician, everyone used the same herbs to reduce a patient’s symptoms. Families would grow these plants and herbs in their gardens, and dry them to keep over the winter. Most families depended on these herbs from their garden or from a neighbor or pharmacist; because in the 19th Century, if you thought you could fix an ailment on your own, you usually did not call the doctor.

This exhibit was displayed at the Museum April – October 2016. This online exhibit features the original exhibition script (text panels) and images and media from the physical exhibition.

This exhibition was presented by York Hospital, with support from Southern Maine Health Care.