The Brick Store Museum, which holds over 70,000 artifacts relating to the history of the Kennebunks and southern Maine, recently discovered a hidden painting in its collection. Holly Rich of Hunter Editions in Kennebunk is helping the Museum to digitize several of the Museum’s paintings, and she was the first to uncover the hidden work by artist Edith Cleaves Barry. 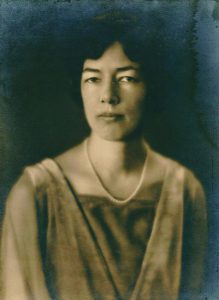 Edith Barry lived from 1884 to 1969, and founded the Brick Store Museum in Kennebunk in 1936. She was an artist that split her time between her ancestral home in Kennebunk and her studio in New York City in the first half of the 20th Century. Barry trained with Impressionist mentors like Claude Monet, Frederick Macmonnies, and Frederick Frieseke in France in the early 1910s. The Museum is the largest collector of her artwork in the world.

Through a generous grant by the Robert & Patricia Bauman Family Foundation, the Museum has been able to digitize several of its major works, including artwork by Barry, Abbott Graves, Louis Norton, and more local artists and scenes. The Museum works with many local, state and national granting organizations to help us fund the museum’s work year-round. Learn more about how to fund projects here. Digital preservation is an important step in the Museum’s mission to preserve the history and art of the Kennebunks for future generations. The Museum selected Hunter Editions, a local fine art reproduction firm in Kennebunk, to capture the works digitally.

Because paintings must be removed from their frames for digital scanning, Hunter Editions’ owner Holly Rich was delicately taking Edith Barry’s “The Start of the East Side Parade” (painted in 1946) out of its ornate frame, only to find an additional piece of artwork on canvas board – an unfinished woman’s portrait – beneath the painting. Before becoming a part of the Museum’s collection 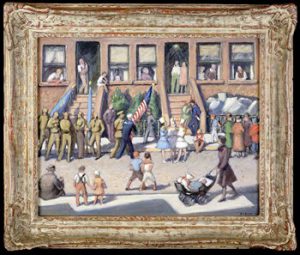 in 1952, the framed painting had traveled to exhibitions at the Montclair Art Museum (New Jersey), the National Academy of Design (New York), and the Ogunquit Art Association. The Brick Store Museum staff was surprised by the discovery, having never known it had an additional artwork by Barry. We are currently researching the identity of the woman in the portrait, and will announce findings on this site.

Edith Barry was a wonderful portrait artist. Most of her commissioned work came from portraits of local families and New York City elites. It makes a lot of sense that she was probably doing a study for a later portrait, and then used this piece as a backing board for The Start of the East Side Parade. We can tell this portrait was painted in the 1940s simply because of the sitter’s hair and clothing styles. Now all we have to do is identify her.portrait_foundunderparade_web

Edith Barry was a world-traveler, and never married during her lifetime. Her photographs and writings of her early 20th Century travels, including to the Middle East, Africa, the American West, and Europe, are preserved in the Brick Store Museum’s archives. I’ve been working on a book about Edith’s 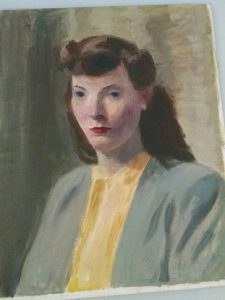 life since I began work here at the Museum in 2010 (it’s a slow road!), after originally becoming interested in her life through my Master’s degree thesis on early 20th-Century ethnocentrism evident in Barry’s travel writing and photography.

Visitors will be able to see “The Start of the East Side Parade” and the newly-discovered portrait displayed side-by-side beginning in September at the Brick Store Museum.

We were so excited that Holly found this piece. In a Museum that’s over eighty years old, with just about 70,000 items catalogued in our collection, you don’t often find ‘surprises,’ much less relating to our founder, and in such an unexpected way. We’re incredibly grateful to partners like the Bauman Family Foundation and Hunter Editions for making these special moments happen. Now, instead of being hidden for eternity, this portrait will be in our collection for the public to enjoy.

Where are you from? Here Comes the Kennebunk Heritage Festival!