The Brick Store Museum has several green spaces on our campus in downtown Kennebunk, through which we are able to discuss landscape history. In 2014, the Museum began its own 1940s Victory Garden, which encouraged hands-on learning about food conservation and gardening while producing much-needed fresh vegetables for our local food pantry.

In 2014, the Museum began its own 1940s Victory Garden, which encouraged hands-on learning about food conservation and gardening while producing much-needed fresh vegetables for our local food pantry. 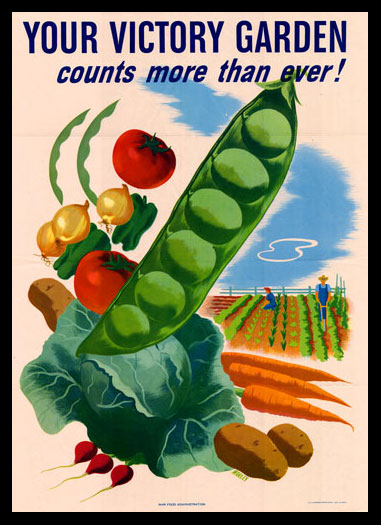 What is a Victory Garden?

Although Victory Gardens are usually associated with World War II, Victory Gardens actually started during World War I when farmers were drafted into war. However, it was not until the 1940s that they became immensely popular. In fact, at their peak there were more than 20,000,000 Victory Gardens planted across the United States.

By 1944, more than 40% of vegetables grown in the United States were grown in a Victory Garden. Even those who did not have back yard space would plant window-box Victory Gardens. Why so many? There was a growing concern about food shortage. A lot of the food grown commercially was being sent overseas for the war effort, leaving those on the home front with less. Victory gardeners also sent produce overseas to support their soldiers.

Schools around the country grew Victory Gardens to use the produce in their school lunches. Growing your own vegetables at home also helped in ensuring that there were enough trucks and trains to assist in transporting soldiers, vehicles, and weapons. Because food was rationed, many of those who maintained Victory Gardens began canning their own vegetables so they would last through the winter. By canning, their ration coupons stretched farther. Victory Gardens played a large part in the success of the home front in World War II, ensuring both food for the home front and for our soldiers. It was important that everyone stayed healthy and fit.

During peacetime, 100% of food goes to civilians. However, during World War II, for instance, 75% of the supply went to civilians, 13% to the armed forces, and 10% to allied nations. Everyone had to make their meals stretch the week – often practicing conservation techniques like “meatless dinners.” Citizens in Kennebunk and throughout the nation were encouraged to install Victory Gardens in their back yards to supplement these rationed goods. Whatever you grew, you could keep.

In addition to growing their own vegetables, Kennebunk citizens also went clamming, fishing, and hunting to add to their family’s food supply. Dandelion greens and berries were also plentiful in fields. Farmers that owned chickens sold the majority of their eggs to the government for the war effort; but would sell cracked eggs (the kind that we throw away today) to citizens who ran out of ration stamps.

Victory Gardeners produced over 10 billion pounds of food in 1943 alone, over one-third of all fresh vegetables in the country.

It’s Cynthia here! We’re visiting the Victory Garden to check on its progress on July 2, 2020. Most vegetables are growing incredibly quickly and the time for our first harvest […]

Starting seeds indoors helps us to get a head-start on the growing season even when the cold weather continues here in Maine! So far, the seedlings appearing through the soil […]

It’s springtime! With the sun out over the past few days, the Museum staff and volunteers have been starting seeds indoors. We have a big plan this year: thanks […] 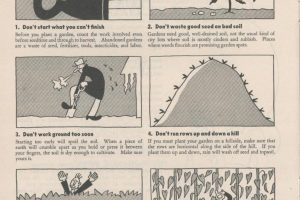 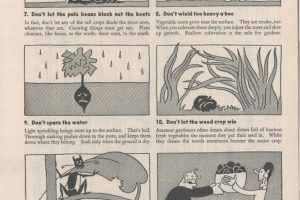 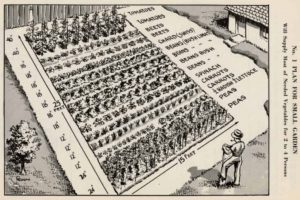 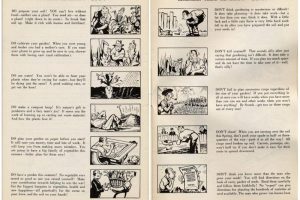 This is a great way to re-use your kitchen scraps – grow more food! All you need is a saucer of water and a sunny window. Take a look at the 1940s suggestions below on how (and what!) you can re-grow your food.

While many vegetables produce easy to harvest seeds that can be planted and grown (peas, beans, pumpkins, and peppers to name a few) many do not.

Fortunately, some vegetables can be regrown from the kitchen scraps that are normally thrown away. Vegetables such as leeks, spring onions, scallions, and fennel have a white root end that is often left over after cooking. Place this end of the plant in a jar of water and then leave the jar in a sunny location.

The plant will begin to regrow green shoots that you can use. Members of the lettuce family (lettuce, bok choi, cabbage, and celery) will also regrow from their white root end. These vegetables however, require a shallow bowl of water in a sunny location instead of a jar. Spray the top of the cuttings now and then to keep the top moist. As new leaves and roots begin to grow, this should take about a week, you may plant the vegetable in soil and within a
few more weeks a whole new head should emerge.

Potatoes can also easily be regrown from kitchen scraps. Pick a piece of potato that has “eyes” (the dark spots where the roots grow) and cut the piece into 2 inch squares, each piece should have one to two eyes. Once the pieces are cut, leave them to dry at room temperature for one to two days. This allows the cutting to callous over and prevents the potato from rotting. After the cutting has calloused over, plant about 8 inches deep with the eyes facing upward and cover it with about 4 inches of soil. Add more soil as roots and growth appear.

Onions happen to be one of the easiest vegetables to regrow. All you need to do is the cut the root end off of the onion leave about 1/2 inch of onion attached. Place the root end in soil and leave in a sunny location ensuring that the soil is moist.

Have you tried this method? Let us know your experience! Email the Gardens Team at [email protected]

Start you Victory Garden at home!

Whether you live in a house, a condo, or an apartment – anyone can start a Victory Garden! You can eat the items you grow, or donate them to your local food pantry (check for local outlets, as fresh vegetables are accepted at specific locations with refrigeration).

To start, check out our Victory Garden Booklet with directions, recipe suggestions, and fun activities to try.

Most vegetable crops require a minimum of six to eight hours of direct sun each day. The only exceptions are the leafy greens, including lettuce and spinach, which can manage with a little less sunlight. If you are planning for your garden site, remember that surrounding deciduous trees will cast far-reaching shade during the growing season. Take a day and watch where your sunniest spots are!

Are you on social media? Use #BSMVictoryGarden to share your progress!

Need visuals? Check out our curated list of how-to videos from across the web on our Youtube Channel. 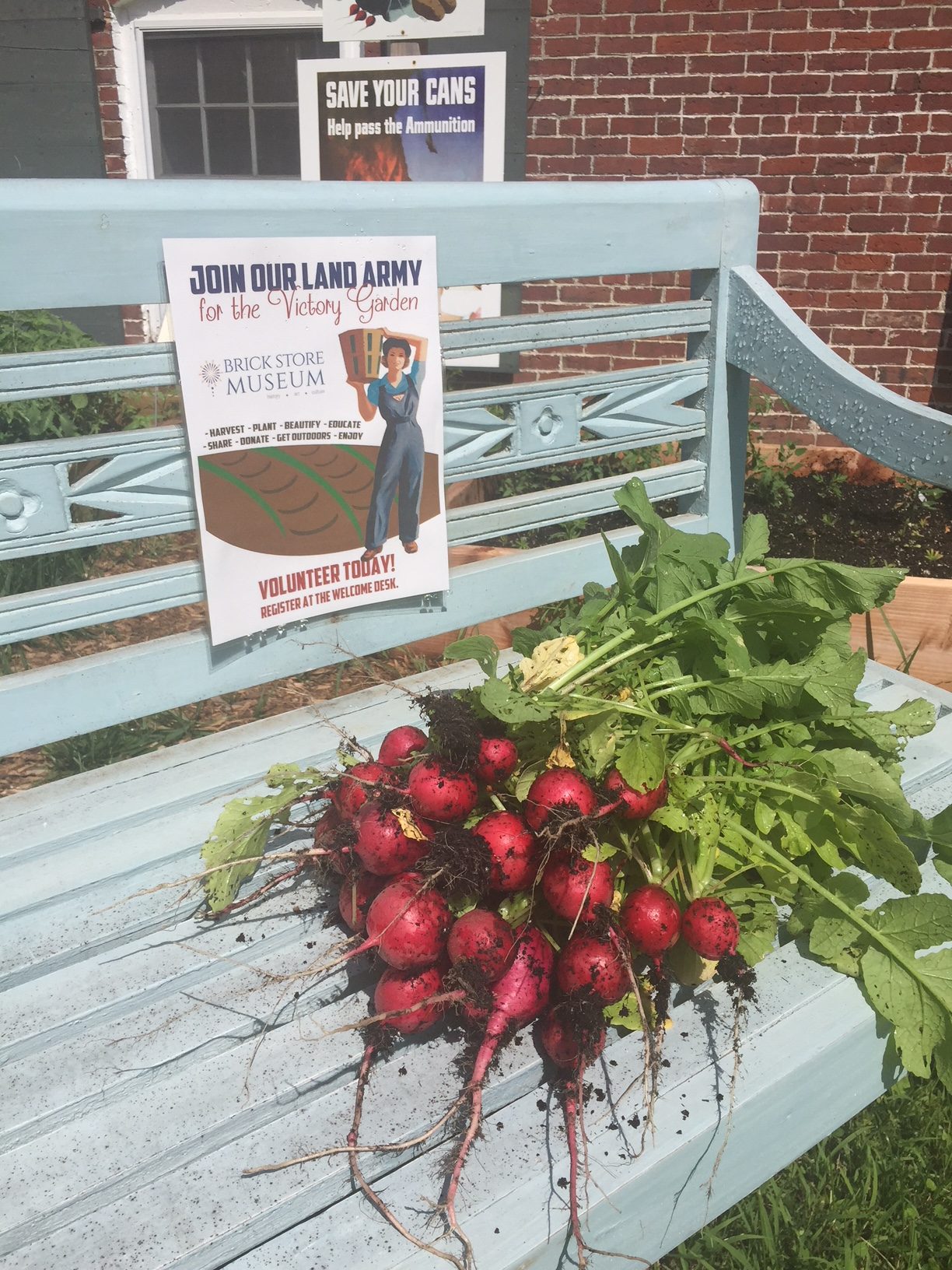 The History Of Victory Gardens & How To Start Your Own!

The chief idea of Victory Gardens is that you don’t have to be a perfect gardener – just give it a try! Millions of families across the nation in the 1940s grew over 10 billion pounds of food in 1943 alone. You can do it, too!

This video (at left) explains the history of Victory Gardens and gives you a few tips to get started with your own growing season. Whether you have a house, a farm, or just a porch – YOU can be a Victory Gardener, too!

Curator's Tour of the Victory Garden

This video (at right) explains the how Museum staff curated the Victory Gardens in 2020 and describes the history behind each plant in the garden.

Care to support the Museum’s Victory Gardens? Your help is always needed! Consider donating $10 to the garden fund this year. Click here to donate!

Here are some great resources on gardening for the 21st Century, including impacts on climate change and where to get seeds:

Healthy Activities in the Museum Garden:

StoryWalk:
This initiative of the 5210 Let’s Go! Program of Southern Maine Health Care encourages children to read and get active at the same time.

The Brick Store Museum has chosen to feature “The Carrot Seed” by Ruth Krauss as its StoryWalk – the pages of the 1940s classic have been reproduced on durable plastic so children and families can explore the Museum’s outdoor garden and art space as they follow the story of a boy and his carrot seeds.

Lunch in the Garden:
Area businesses and employees (and visitors, too!) are invited to bring a picnic lunch and dine outdoors in the garden.

Shade by SMHC:
Southern Maine Health Care Dermatology has generously sponsored a beautiful hanging umbrella to provide shade to volunteers, staff, and visitors when they are out in the Victory Garden. Come on over and learn a bit about sun safety!

“The Carrot Seed” by Ruth Krauss

“The Tiny Seed” by Eric Carle

“Planting a Rainbow” by Lois Ehlert

“Waiting for Wings” by Lois Ehlert